RICHMOND, Va. — Citing a lack of revenue from patrons who spent all of their time fixated on their fantasy worlds, a Sims-themed bar closed its doors this week after only two months of operation.

Simoleon, which opened in Scott’s Addition in January, was the brainchild of investors eager to offer a new concept bar based on the popular Sims video game series. However, due to the unforeseen issue of patrons forgetting to purchase food and drinks while addicted to their consoles, the establishment quickly found themselves losing money.

Christopher Fredericks, Simoleon’s manager, thought they had a solid business model, following in the footsteps of other barcades such as The Circuit and Bingo Beer Co.

“We really thought we had a great idea: everyone gets their own console and a card to keep track of beer purchases,” he explained of the project, which offered dozens of craft beer varieties on tap along with cheap bar food. “We even charged a few cents per minute to play each Sims game. We offered every version of The Sims, ranging from SimCity to The Sims 2: Apartment Pets. The only thing we didn’t have was bar revenue, and no one found out why until it was too late.”

A post-mortem of Simoleon showed that the business immediately operated at a loss. Kathryn Wendall, who frequented the bar during its short existence, shed light on why that may have happened. “I’m really going to miss Simoleon, it was great,” she explained, detailing how her life schedule began to revolve around the bar.

“I would get in after work around 5, park myself at a booth, and then continue building my dream house. Then I’d take my Sim to her little Sim bar and get her a few drinks before she went back to her Sim husband and Sim kids. Next thing I knew it was midnight and the manager was kicking me out.”

Fredericks commented that Wendall’s behavior was typical of their customers, who would show up to Simoleon, buy one beer, and then seemingly forget that they were actually at a bar while engulfed in their Sim worlds. “I’m pretty sure our customers were spending more money on their Sims than they were in our actual establishment.”

Wendall confirmed the assumption. “Yeah, I’d usually get like a Miller Light, whatever was cheapest. Typically I’d intend to order another one, but I’d get so engrossed in living out a life of quiet desperation in virtual suburbia that I forgot to live a life of quiet desperation in the real world. Also, they didn’t have tots. What’s up with that?”

Fredericks was disappointed that the business shut down within two months, which is the current record for any bar that does not serve tater tots. However, he has big plans for his next project. “I believe that the barcade model can be expanded, but it needs a few tweaks. My next idea is a World of Warcraft bar. I want people to play something that isn’t too immersive. Fingers crossed.”

Fancy The Peedmont? Because we’ve got merch. 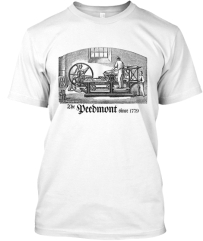