City officials received a certified letter in the mail early Friday morning notifying them that a late night vote had been held over whether to finally throw off the oppressive yolk of municipal governance and that the decision was unanimous in favor of secession.

“The days of carefree tomfoolery are over,” Yancy Mulligan, newly minted Mayor of Texas Beach, told a group of reporters outside Richmond City Hall in a hastily organized press conference. “There’re going to be some changes around here, I’ll tell you what.”

Initial reports have suggested that Mulligan, a wild-haired man with dirty cargo pants and no shirt, was the sole voter in Sunday night’s referendum. At first many regular visitors objected to the results, arguing Texas Beach had no permanent residents unless you counted the rats. However, sources confirmed that since Mulligan has been squatting on the land on and off for at least 10 years, according to state law, he was well within his rights to call the vote.

“My daddy used to spend weekends at the beach, and his daddy before him.” Mulligan told The Peedmont. “I was born here. Hell, I was conceived here. And dag gummit, I want my children and grandchildren to be conceived here too.”

Negotiations with the City of Richmond regarding the beach enclave’s exact boundaries are expected to continue for several weeks. However, city officials anticipate the newly independent region will extend as far west as the Boulevard Bridge and as far north as the Texas Beach Skate Park.

Under its new leadership, Texas Beach will also soon begin enforcing an updated code of
conduct for visitors.

“From now on, teenagers will have to pick up their empty cans of PBR when they leave, and
small children will only be allowed to stay if they quit complaining about the hike it takes to get here. As usual, dog fights will be held every Tuesday afternoon.”

Why not stop by our online store while you’re here? 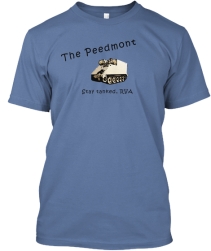