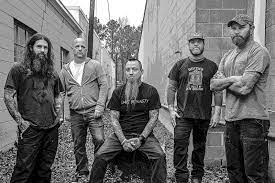 Last night, acclaimed Richmond punk band Avail played what we assume was a pretty awesome gig last night on Brown’s Island. Despite being a highly anticipated show, our senior live music correspondent forgot to get tickets for the show and presumably spent the evening watching Hulu, but this is what we’re pretty sure their show was like.

A few minutes prior to sundown, Avail took the stage and put on one hell of a show. The show opener, Deepwood, was met with a thunderous roar from the crowd, and towards the end of the song, the band set fire to both the Potterfield Bridge and the canal bridges, thus trapping everyone onto the island. We don’t know if audience members are still there, but it wouldn’t be a bad idea for someone to go check it out and maybe send a rescue boat or something.

At some point during South Bound 95, the crowd collectively tossed one of the concession’s taco trucks into the James, where it floated further down the river to a horde of crust punks who pulled it ashore and placed it next to the actual southbound I-95 lanes, thus providing I-95 motorists with their very own taco truck.

Later on during the set, during Nickel Bridge, the band stopped the song halfway through to inform the crowd of a new petition they were starting to bring the cost of the bridge back down to 5¢. Drummer Erik Larson passed out propaganda fliers to audience members before returning to the stage and finishing the song.

The show continued with the band performing classics such as Model and Virus, the latter of which was preceded with a reminder to all audience members to make sure their face masks were on, regardless of beard size or shape. About an hour into the show, the mosh pit grew to the size of a Museum District roundabout, at which point WRIC ABC8 Chief Meteorologist John Bernier, who was a surprise guest providing backing vocals, was forced to issue a Circle Pit Warning for areas along the James River.

We’re also pretty sure that, while roughly 500 people are presumed dead from the pit, an additional 600 were born from it, so the numbers are still positive.

We’re also fairly certain that the show’s finale was a new song, either called Bus Lane Fuck Stain or Chicken Bone, and during a solo, at least four buildings along the downtown riverfront sustained moderate damage. Unfortunately, they’re all still standing.

All in all, we’re sure it was an amazing show, and we look forward to the next one that we hopefully can send our cheapest senior live music correspondent to.